(If you’re not familiar with the Native Seed Pilot Project, check out this news release.)

Native Seed Project Coordinator Isaac Matlock joined our staff in October and immediately got to work collecting seeds with the help of partner organizations and several volunteers. We caught up with Isaac to ask him how the collection season went. 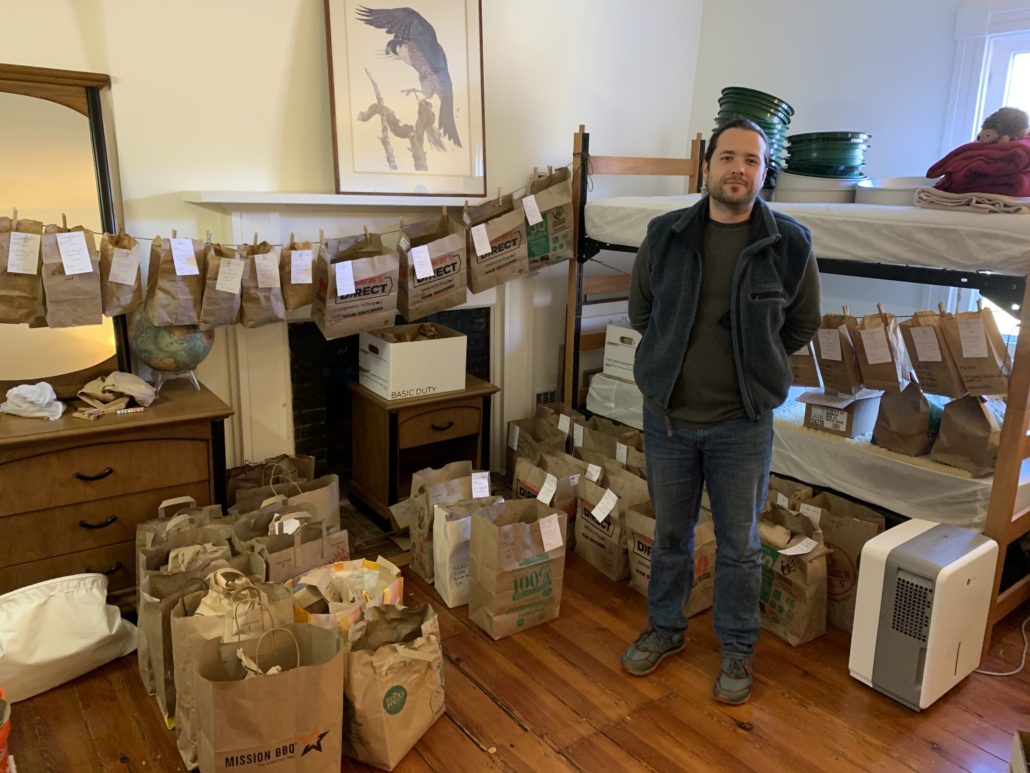 Native Seed Project Coordinator Isaac Matlock standing in front of a portion of the seeds collected this season.

Q: What were your goals for this fall?
IM: Our primary goal was to collect as much seed as possible from the three ecoregions of Virginia (Mountains, Piedmont, Coastal Plain). Our target species for this project are common plants found throughout the state, but in order to ensure we were collecting plants considered Virginia ecotypes we needed to confirm the sites we were visiting had no prior history of seeding or planting that would have come from outside sources.

Another goal this season was to record new sites that could be potential collection areas for future years. By growing our inventory of potential collection sites, we’ll have the ability to collect a larger quantity of seed overall but also reduce our dependence on any given population. Collecting too much seed from one area can be detrimental to the given species and their associated ecosystem. Having as little as possible impact on these places is a vital part of this project.

Q: What is one challenge you faced?
IM: One of the most significant challenges so far in this project has been locating species with populations large enough to sustainably collect seed from. There are many reasons for this challenge, but habitat destruction has the most significant impact. Our goal is to bring these native plants to the seed market in order to make them more widely available in Virginia and introduce a lucrative crop for farmers around the state, but also to ensure the survival of these species for their own sake and for the animals that depend on them. Continued spread of urban development makes things difficult for our state’s biodiversity and collecting these species now will hopefully assist in maintaining healthy populations or, in some cases, reintroducing them to areas that they may have been extirpated.

Q: What went well?
IM: Despite the shortened collection season [because Isaac started in October] and the ongoing search for new collection sites, we were able to collect a considerable amount of seed this year. We managed to collect seeds for sixteen of our eighteen target species.

Additionally, the majority of the seed collected this season came from private land with owners kind enough to let us do so. Many of these landowners were acquainted with the native plants on their land and were excited to contribute to their conservation, while others were excited to learn new things about their property. A project like this provides a great example of the value native plants bring. I believe this can provide people with an elevated appreciation for the natural world outside their front door and aid in long-term conservation of these species.

Q: What’s next?
IM: As we move into winter, we have two priorities for the coming year. With the assistance of farmer advocate organizations, we are working to recruit farmers in the northern Piedmont region that would be interested in incorporating native plants into their current agricultural system. We also have to prepare for plug production in the spring while the seeds are being processed by our partner Ernst Conservation Seeds in Pennsylvania. Clifton will be building a new greenhouse that will be able to produce roughly 18,000 plugs. Once the plugs are ready, we will provide them to farmers at no cost to plant for future seed collection.

Stay tuned for news about our new greenhouse in the next couple of months! And if you are a farmer who would like to learn more about the project please email Isaac at imatlock@cliftoninstitute.org

The Puzzling Piedmont: What Is It And Why Does It Matter?
Scroll to top