(This story originally ran in our email newsletter. Keep up to date with more wildlife sightings, programs, news, events, and more by signing up at the bottom of this page!)

On June 17, Education Associate Bridget Bradshaw spotted an odd insect. It had an oblong black body, long antennae, and clear wings. It looked like a wasp-moth hybrid, which turned out not to be far off! The insect Bridget saw was a Synanthedon richardsi, which is a rare member of the clearwing moth family Sesiidae.

We wanted to learn more about this beautiful and apparently rare moth so we contacted THE expert on these insects. William Taft is an aquatic entomologist who is one of few people studying the Sesiidae family in depth, and he was kind enough to speak with us more about these mysterious insects.

Synanthedon richardsi was first described in 1946. In 1988, more details were published on clearwing moths in a volume of the Moths of America North of Mexico. According to this publication, Synanthedon richardsi ranges from Maryland to Georgia and west to Ohio and Kansas, but it is rare and “nothing definite is known about its life history.” 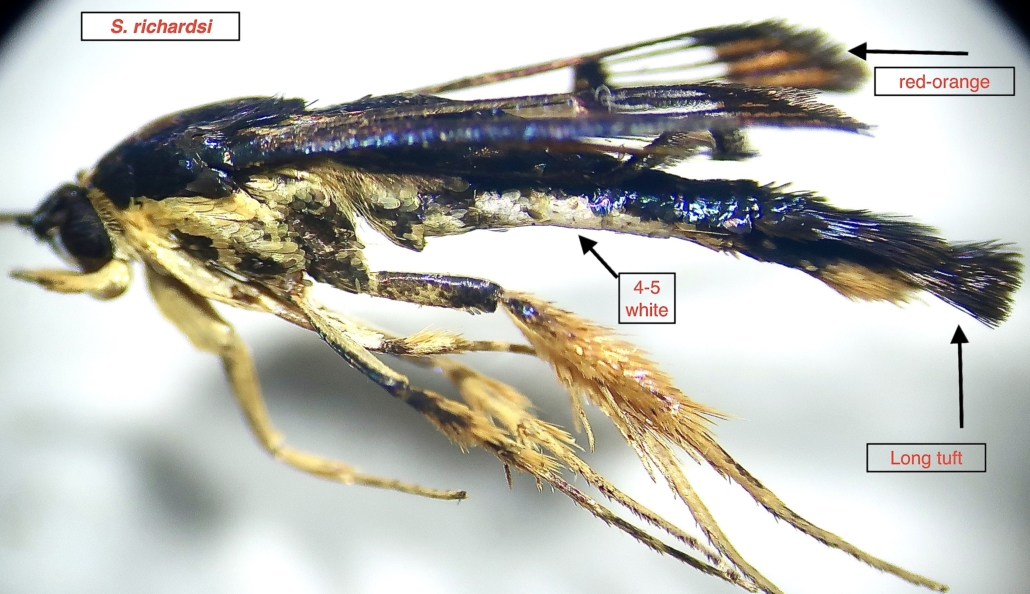 A photo of Synanthedon richardsi with field marks for identification. Photo courtesy of William Taft.

Since 1988, not much more has been learned about this elusive insect, but Taft is determined to change that.

“People are interested in the family, but not that interested,” Taft said. “People are generally more interested in silk moths and hawk moths. But I collected those as a kid, so there weren’t any more mountains to climb there for me. As far as I know, I am the only person in the U.S. actively seeking these things by driving across the U.S. and trying to figure out when and where they emerge.”

Clearwing moths range from just five millimeters up to a wing length of 28 millimeters. They are accomplished mimics of wasps and bees mainly due to their clear wings, but some clearwing moths in the western U.S. have been observed mimicking wasp behavior to complete the illusion. Their caterpillars feed on herbaceous plants, including the trunk, crown, root, stems, seed pods, and even galls. They’re generally short-lived as adults, likely only surviving for a week after emerging. Many clearwings can pose a threat to agricultural plants (an infamous relative of Synanthedon richardsi is the Squash Vine Borer (Melittia cucurbitae)) but they also provide food for anything that includes insects in their diet.

Synanthedon richardsi seem to prefer viburnums as food plants. Our sighting was near a Blackhaw Viburnum, but Taft also described a sighting in South Carolina that was near Walter’s Viburnum.

Taft’s main focus is trying to locate and collect clearwing moths so he can sample their DNA and develop better genetic markers for distinguishing between species.

“If you have multiple species feeding on oak, which a lot of them do, and you want to know if they’re actually distinct species, well, a lot of them look very similar so the only way you can tell the difference is color, flight period, or which synthetic pheromones they come to,” Taft said.

Taft relies on help from users on websites like iNaturalist and Bug Guide to help him with his search. When someone posts a photo of a clearwing moth, Taft notes the date of the photo and the location it was taken, which will help him narrow down the best times and places to look for the insects he wants to collect.

“If no one looks, no one finds,” Taft said. “That’s always been an issue. There aren’t as many people these days, except hunters and fishermen, who are really out in the woods. If it doesn’t happen in their backyard or along a hiking trail, it gets missed. But that’s where people out taking pictures really come into their own.”

We think this is a great example of how much there is still to learn about the natural world, and how close to home these discoveries can happen! If you’re on iNaturalist, we encourage you to join our biodiversity inventory project and submit observations from the property. We have contributed four records of these rare moths so far!

Expert Advice On Land Management For Wildlife, Brought To Your Doorstep
Scroll to top